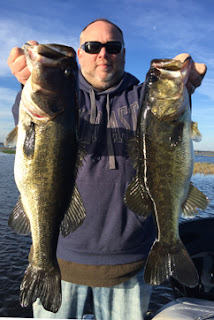 It's the Monday after the Bassmaster Southern Open Competition finished on Lake Toho and by now everyone has left for home after what would be considered a typical Florida tournament. When doing my tournament predictions there is always a huge risk that I could be completely off the mark and left with mud on my face. But because I am out there on a daily basis with clients throwing lures chasing big bass it isn't really that much of a risk in my opinion.

Winning weights, lure choices and what competitors needed to make the top 10 cut were all spot on once the last fish was weighed in. My hats off to those that made the top 10 because it wasn't easy fishing and to finish strong meant having everything fall into place and making the right decisions.

During the practice days we did some live bait trips and it was obvious the weather and moon phase were dictating the movement of the bass and how they were feeding. 20-25 bass were being caught with morning being when the heaviest feeding would occur as the moon would be over head for the first part of the day. Most of the bass we were catching on Lake Toho were males feeding heavily before moving up on beds with the occasional female mixed in with them. 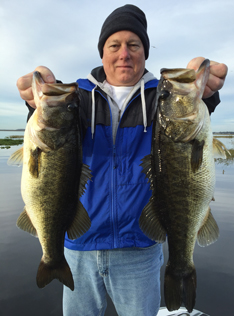 On the first day of the tournament I met my clients at a different launch site on Lake Toho looking to avoid the 200 boats that would be putting in. It was a humid but wet morning for February and once we launched it would be the last time any of us were dry. It rained literally all day with a heavy fog set in to the entire Kissimmee Chain of Lakes. Conditions were good for lure fishing which we were doing but it was the 3rd day of low pressure and the front was already leaving as the day continued.

My expectation were that bass would be up shallow and somewhat active considering the conditions. But for us to know bass are active we have to be able to present lures to the fish in a way that they are willing to eat it. This can be the most challenging thing for clients on days like this. After some time working with my clients with no success I started trying some different presentations to see what was possible. I was able to get bites using multiple lures but for my clients Texas rigged worms was what they had the most success on. It was a hard 8 hours of fishing in tough conditions but everyone had a good time and at the end of the day we had boated around 20 bass. Our best 5 would have been around 12 lbs which isn't great for Lake Toho but it would have been better than most on that day.

On the second day of the tournament my clients arrived a few minutes late but we were able to get onto the water just before the first boats launched. It was 45 degrees with strong winds out of the Northwest but fortunately we were using live bait for this trip as the front was well past us at this point. We were also past the full moon phase as well which I felt would be a factor.

Within the first 5 minutes my clients had a 6 and a 4 1/2 in the boat which would not be indicative of the rest of the 4 hour morning. After 4 hours we had 8 bass with water temps falling and conditions deteriorating by the minute. Hard to say what we might have caught if my clients had arrived on time but it was obvious they were eating when we got there. Day 2 was probably the toughest weather day on Lake Toho.
Lake Toho Trophy Bass Guide
Posted by Lake Toho Guide at 3:20:00 PM